As I most recently have a little time, I had been looking on the internet yesterday. In need of fresh, interesting thoughts, inspirational recipes that I have never tried before, to amaze my family with. Looking for a while but could not find too many interesting stuff. Just before I wanted to give up on it, I discovered this delightful and easy treat simply by accident over Suncakemom. The dessert seemed so yummy on its photos, that called for urgent action.

It was simple enough to imagine just how it is made, its taste and how much boyfriend is going to like it. Actually, it is very easy to impress him when it comes to cakes. Yes, I’m a lucky one. Or perhaps he is.Anyhow, I visited the site and simply followed the detailed instuctions that were accompanied by wonderful photographs of the operation. It just makes life quite easy. I could suppose it is a slight effort to shoot photographs in the middle of baking in the kitchen because you most often have sticky hands therefore i highly appreciate the time and energy she devote to build this post .

That being said I am encouraged presenting my own, personal formulas in the same way. Thanks for the concept.

I was tweaking the original recipe create it for the taste of my loved ones. I have to tell you it turned out a terrific success. They loved the taste, the structure and enjoyed getting a treat such as this in the midst of a busy week. They quite simply requested more, more and more. Hence next time I am not going to make the same miscalculation. I am likely to multiply the quantity . 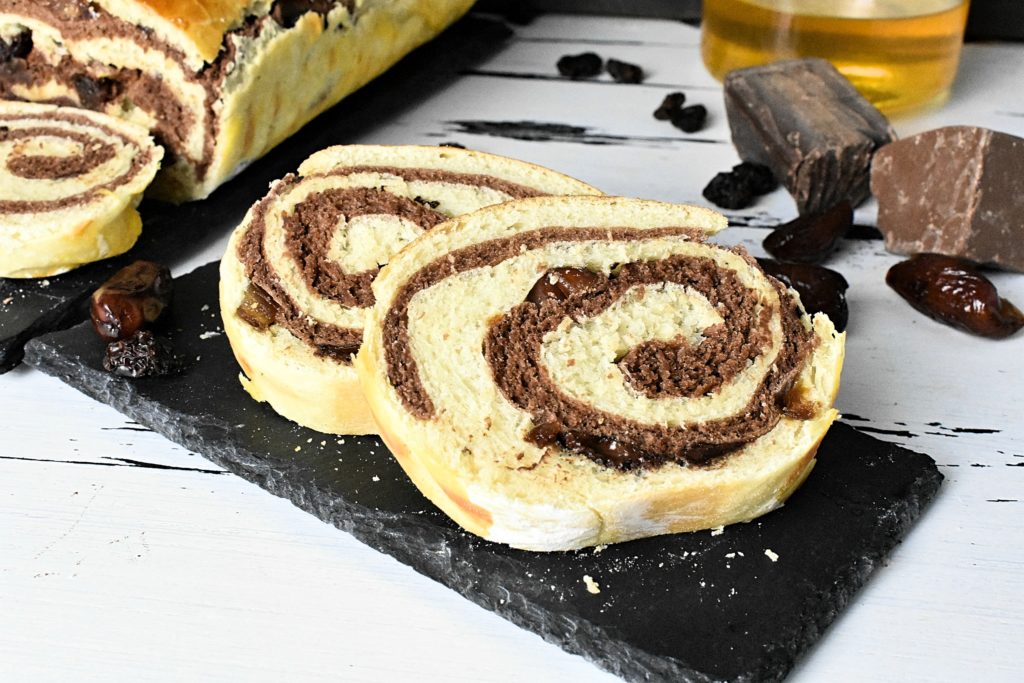 In a cup, combine lukewarm milk and yeast. Set it aside. If it gets foamy don’t worry. It’s completely normal.

In a large bowl, mix the flour, eggs, butter with the yeast and milk mixture very well until the dough gathers into a ball.

Put half of the dough into another bowl and leave it in a warm place to rise.

Mix the other half of the dough with the cocoa powder until even.

Put the cocoa dough half next to the other half of the dough into the bowl, cover it and leave it in a warm place for another half an hour to rise.

Now we have time to get dried fruit ready. If necessary cut them into small pieces.

After half an hour turn the dough out onto a lightly floured surface and make 4 balls out of them. 2 cocoa ones and 2 plain ones. Knead until they’re smooth and elastic, leave it somewhere warm for another 20 minutes to raise.

Use a rolling pin to roll one of the dough into a flat square shape as big as our tray.

Sprinkle half of the dried fruit supply on top.

Flatten one of the other color dough into more or less the same size as the first one and put it on top.

Roll it up into a rope form and put it on the tray.

Repeat it with the other pair of dough.

Check if it’s baked with a tooth pick. There’s dough stuck on the tooth pick pop the tray back for another 10 minutes or so.

When it’s baked leave it to cool down a bit then we can slice it easier.