Longing for cinnamon or just craving for some tasty bread? These cinnamon rolls will fulfill both just let them a bit of rest!

As I most recently have some time, I was surfing on the internet yesterday. In search of new, challenging thoughts, inspiring recipes that I’ve never tasted before, to amaze my loved ones with. Hunting for a while unfortunately could not discover lots of interesting things. Just before I thought to give up on it, I came across this scrumptious and simple dessert by accident on Suncakemom. The dessert looked so delightful on its photos, that called for urgent actions.

It was simple enough to imagine just how it is made, its taste and just how much boyfriend will love it. Actually, it is rather simple to please the man when it comes to desserts. Yes, I’m a blessed one. Or maybe he is.Anyhow, I went to the blog and simply followed the comprehensive instuctions that were coupled with superb pics of the process. It really makes life much easier. I can imagine that it is a bit of a hassle to shoot pics in the middle of baking in the kitchen as you typically have gross hands thus i highly appreciate the commitment she devote to make this blogpost and recipe easily followed.

With that said I’m encouraged presenting my own, personal dishes in a similar fashion. Many thanks for the thought.

I was tweaking the initial mixture to make it for the taste of my loved ones. I’ve got to mention it was a great success. They enjoyed the flavor, the structure and enjoyed getting a delicacy like this in the midst of a lively workweek. They quite simply asked for more, more and more. Hence the next time I am not going to commit the same mistake. I’m gonna multiply the amount . 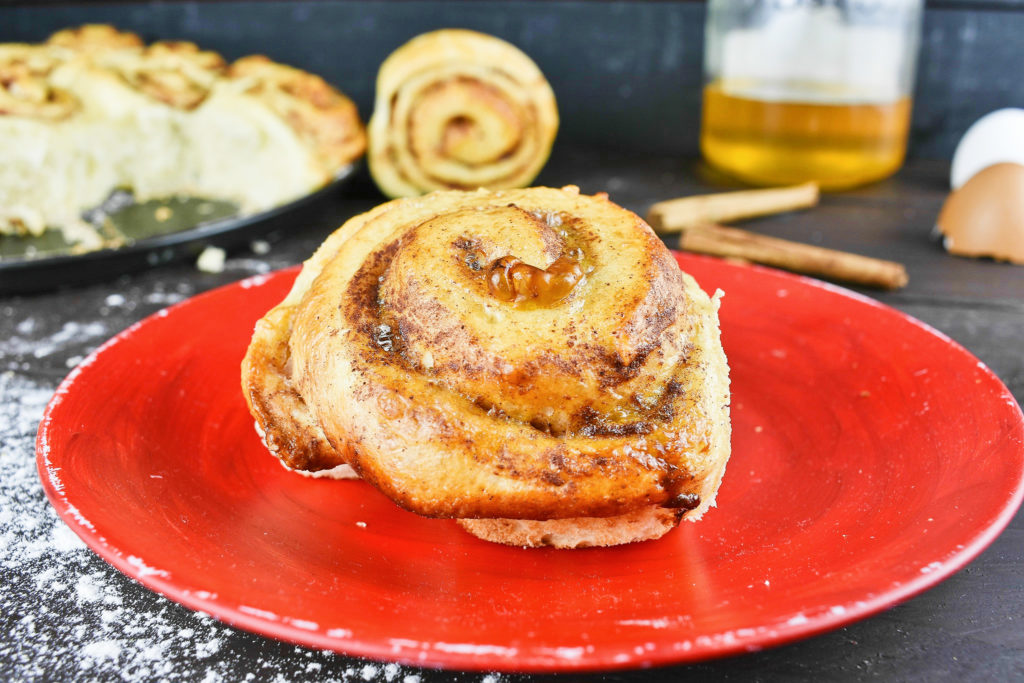 Knead the mixture until a soft dough forms.

Cover top with the lid or a plastic wrap and place in a warm spot until it doubles for about 45 minutes. Yeast feeds and reproduces best between 70°F / 21°C and 80°F / 26°C. If the house is too cold, turn on the oven for a couple of minutes and put the bowl in to let it rise there. Mind not to let the temperature rise above 100°F / 40°C!

Roll out dough on a lightly floured surface to a 12″ / 35cm square.

Use a sieve to sprinkle cinnamon onto the squared dough. Spread agave or the sweetener of choice on the top of it. Optionally, put some raisins on top to give it a better taste.

Cut crosswise into 1″ / 2cm wide pieces. (Clean knife after each slice to make it easier to cut.) Place the pieces apart on the baking tray.

Cover and let them rise for another half an hour.

Bake for about 25-30 minutes (depends on the oven) and take them out when they have a nice golden color.