Lovely pizza dough made thick and rolled up with the pizza topping inside. Sprinkle a bit of cheese on top and there we have the perfect pizza roll!

As I lately have some time, I was looking on the internet last week. Looking for fresh, exciting tips, inspirational meals that I’ve never tasted before, to treat my loved ones with. Hunting for quite some time but could not find too many interesting stuff. Right before I wanted to give up on it, I came across this fabulous and simple dessert simply by chance. It looked so scrumptious on its photos, it required quick actions.

It was easy to imagine just how it’s created, its taste and just how much boyfriend will probably enjoy it. Actually, it is rather easy to please the guy in terms of puddings. Yes, I’m a blessed one. Or maybe he is.Anyways, I went to the blog: Suncakemom and then used the step-by-step instuctions that were accompanied by wonderful graphics of the operation. It really makes life much easier. I could imagine that it is a slight hassle to take pics in the midst of baking in the kitchen as you will often have gross hands so that i really appreciate the effort and time she placed in to build this post and recipe easily implemented.

That being said I’m inspired to present my very own recipes similarly. Thanks for the thought.

I was tweaking the initial recipe create it for the taste of my family. I can say it had been an awesome outcome. They prized the flavour, the thickness and loved getting a delicacy like this in the middle of a hectic workweek. They ultimately asked for lots more, a lot more. Hence the next time I’m not going to commit the same miscalculation. I’m likely to double the quantity to get them happy.

This was inspired by Pizza Roll from SunCakeMom 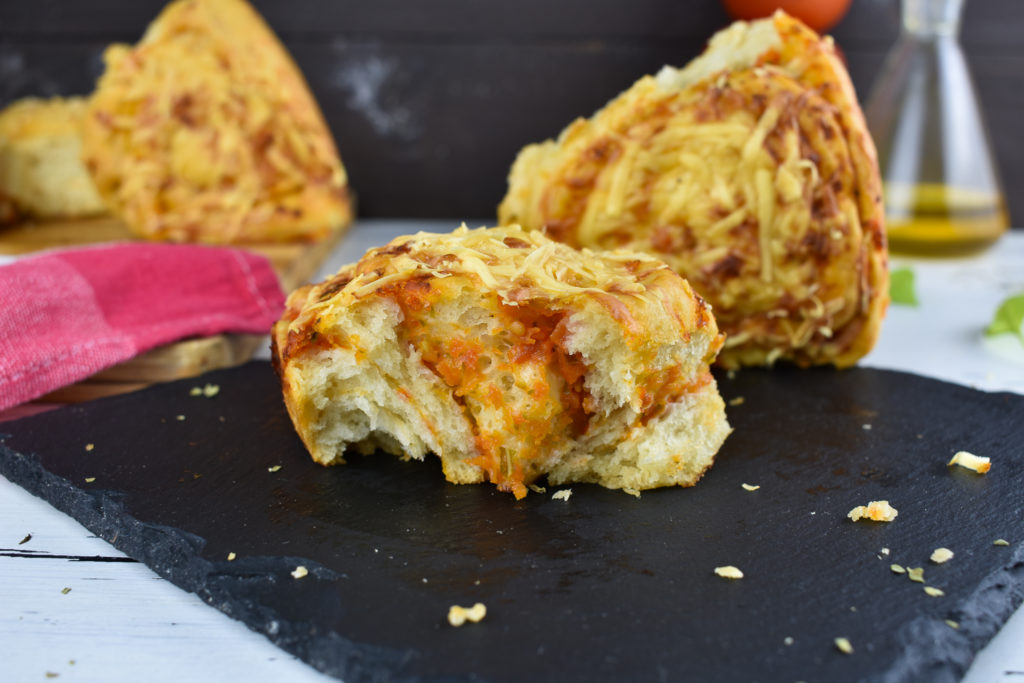 Put fresh yeast into half cup of lukewarm (not hot!) milk. Set it aside whilst preparing the other ingredients.

Get a big bowl and put flour, sliced room temperature butter, egg and the lukewarm water in it.

Pour the yeasty milk into a big bowl on top of the other ingredients.

Cover the bowl and leave it in a warm place for about an hour to rise. (We can put it in the 100°F / 40°C heated oven. Be careful not to turn the heat higher than that as it would kill the yeast so the dough won’t rise.)

In the meantime, prepare the filling. Chop tomatoes, basil, oregano, salt and olive oil in a blender.

Pour it into a saucepan, bring it to boil and simmer it in low-medium heat for about 20 minutes while stirring occasionally.

Take it off heat and set it aside. Pouring hot sauce on the dough, would make it gooey and so hard to handle that it would ruin our day.

After an hour waiting take dough out of the bowl onto a well-floured work surface.

Roll it into a square. Flouring underneath the dough is important as this coating will prevent it to stick down.

Place the pieces apart on the baking tray.

Cover and let them rise for another half an hour. Meanwhile grate the cheese and turn the oven on to 180 C.

Sprinkle cheese on top before popping it into the oven.

Bake them for about 20 minutes or until the cheese it melted and golden brown.